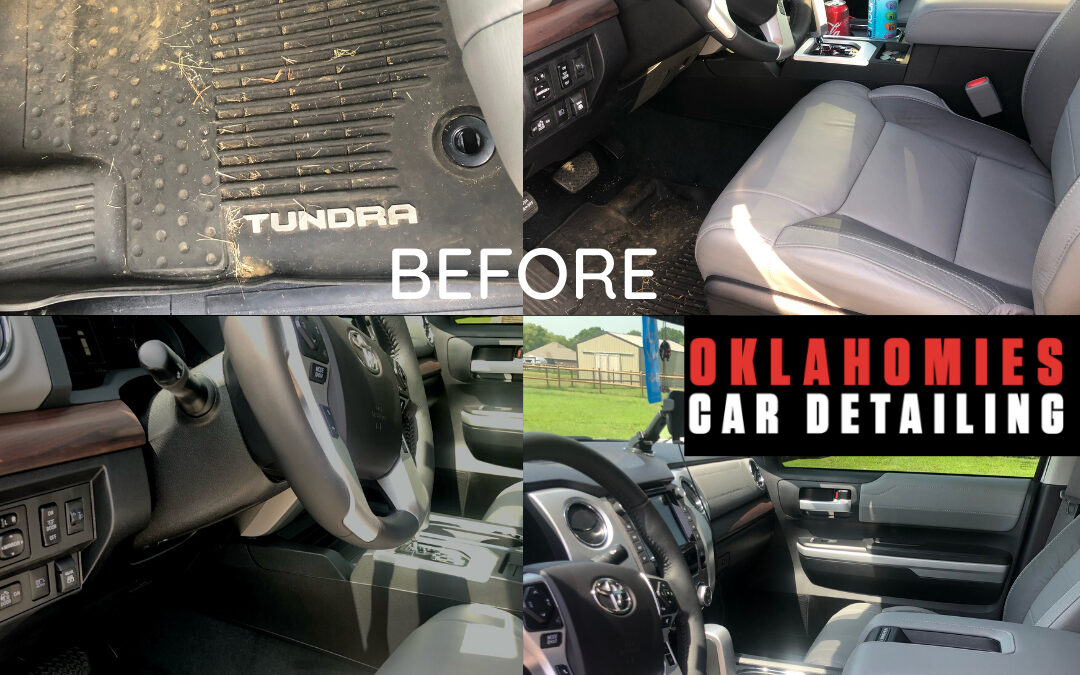 First, keep the pad flat on the surface for car detailing Tulsa. The second would be pressure, how much pressure, do you push down while you’re polishing your car. I will give it probably roughly three to five pounds of pressure what you think three to five pounds of pressure is all explained to you here in a second, how to understand what that is, pace, would be the third one. Do good pacing on how fast you’re moving while you’re polishing. You don’t want to turn this on and do a traditional rotary buffer where it’s just not effective. With a dual-action polisher that’s not the gear that the rotations not gear driven, you can go about this fast.

We talked about polishing correctly for car detailing Tulsa and the main thing is keeping it flat. The pressure, three to five pounds pace going about this fast. Then the last one I’d like to say is the pattern. Okay, the pattern you don’t want to go in circles. You go across like this and then you overlap, go straight across, it is called cross-hatching. You do that going side to side this way from left to right. Then when you get down here, you go up and down, doing the same thing. Now I’m going to start here and I’m going to do exactly what I just did discuss with the speed four. I’m keeping the polisher flat on the surface. I’m using this hand for pressure, and to guide where it goes.

The other thing on a technique that I like to tell people when doing car detailing Tulsa is that some people like to hold the polisher here. I generally like to hold it like this because I want the pressure of my hand going straight through that top to the backing plate. What I’m looking for right now is we have a pad conditioning brush. Actually, I can use one of these things, because it’s fine. Normally I would have a conditioning brush here, I have mostly thrown it in my car and who knows what happened to it I was sitting right over there. All right, I just need some sort of bristles because this just got matted down. If you don’t have a power conditioning brush but you have a mini cockpit, use this so what we’re going to do is brush this now because when it’s matted down what happens is it becomes less effective, it just glides on the surface. It’s not allowing the fibers to do their thing.

What you want to brush this back up with either a pad condition brush. If you have a pad condition brush you want to use that. If not, I’m just using this mini brush so you can see it brought the fibers back. Now, I’m going to add a little bit more polish to this. Just a couple of drops like that. Then I’m going to take detailed spray and rehydrate the polish that is in there, one spray at a time, maybe a little bit more. I’m going to continue on my passes. Again, spread this out so you don’t sling polish all over your car and all over yourself. Now we go again. I’m going to do my passes going up and down in a crosshatch pattern.

Do you have to use detail spray to rehydrate the polish in your polishing pads? I would say it’s the best product to use for it. You could use CS three or waterless wash because that’s mainly what he’s using now, he’s not using as much detail spray. You can but the I think the problem with it is those have complex formulas and they have a lot of different things in them. When you use them with polishing and it generates a little bit of heat on the surface, it tends to not work as well, I don’t I’ve used waterless wash before, and just is not the same. I don’t know what it is about it. I know that Phil polishes sometimes he ran the shine stop and I was polishing, he’s used graphene detail spray to rehydrate and he says it works great so I’ve never used it, but he recommended it. I tend to just stick with detail spray and look when you’re doing polishing stuff, detail spray is such a great tool to have. We use the best tools at 918-999-0355 or by visiting https://oklahomiescardetailing.com/ today.

Car Detailing Tulsa | Dress For Success From Wheel To Wheel

With all of your polishing stuff, you have rehydrated the polish and the pad when doing car detailing Tulsa. It also will rehydrate the polish on your car so it makes it easier to remove. Okay, it also works as your clay lubricant, before you even start polishing. It can also work as a drying agent when you’re drying it before you start polishing. I just recommend having this on hand if you are going to be polishing, it’s the right tool for the job. How do you clean the cars the best way possible? That is why you need to bring them to Oklahomies Car Detailing now.

At some point, I’ll just say this, use a lot of all-purpose cleaner for car detailing Tulsa. Use a bucket with a grit guard. That’s just a little tidbit but it’s highly recommended to clean these you don’t need to like polished ones and throw them out. Okay, you can use these for a wonderful car detailing appointment. One of our lead detailers for Barry Jackson is great and I’m not kidding you, these foam pads are great. He grinds them down so much, so they’re just barely anything there. I’ll get more in-depth after I’m done polishing. I just want to get through polishing so we can see the finished product.

You want to start the machine while it’s on the car detailing Tulsa. You want to turn the machine off while it’s in the car as well. There we go, there’s a little bit of polishing and keep brushing this kind of like mini concrete. Now, this polish is pretty dry because I have the door open the witness circulating through so I’m going to use detail spray because I don’t like it if I polish this and then I go to wipe this off, I’m grinding this off, you’ll see scratches from the towel because of the pressure of how hard you’re pushing. You want to use the weight of your hand while you’re wiping this polish off so I genuinely just give it like a couple of spreads. Now I can just use the weight of my hand, and it comes off a lot easier with no damage to the vehicle.

That looks really good and I took out most of the damage and the swirl marks. A lot of the scratches were removed. Let’s come back over here so you guys can see what it’s like over here on this site. There’s some haze from the compound which is normal and completely natural. That’s why we have the polish step. You can’t do compound and then get your car perfect, because the compound is intended to be aggressive to remove this kind of scratches. You want not to grind it down but you want to be aggressive enough to remove those scratches. When you get into the finishing part if you use polish it’s not aggressive enough to remove those scratches. The polish will remove the haze from the compound so that’s what we’ll do next.

There’s compounding which will be removing a lot of damage that is in the car paint and clear coat. Now we get into refining that. It’s the same idea with our compound and the polish compound is starting, aggressive, let’s just pretend that it’s, you know 1000 grit abrasive. The cool thing about our compound with the abrasive is that’s called a diminishing abrasive. You start out with1000 Grit compound abrasive okay then polish. As you polish and you agitate those abrasive pieces, and the abrasive starts to break off, your abrasive gets aggressive and it slowly refines itself down. That’s why you’re able to polish this in the haze. The abrasive in your compound is braiding itself down to make it refine the finish. Your car will have a mirror glave finish like the examples on https://oklahomiescardetailing.com/ so be sure to book a call with us at 918-999-0355 now.